One of the most exciting and engaging aspects of living and working in a city like Baltimore is having the opportunity to be involved in so many amazing and inspiring organizations. Over the past couple weeks, two organizations that I hold very close to my heart, both of whom inspire and enrich the communities that surround them through making, came together for a brief but awesome new collaboration.

Make Studio is a community-based art center and studio located in Hampden that provides programming, studio space, and exhibition opportunities to artists with disabilities. Artists involved in Make Studio make and use a wide range of materials and processes and exhibit their work throughout the Baltimore and Mid-Atlantic region. Make Studio is celebrating the aesthetics and concerns of artists commonly typed as “outsiders”, and bringing visibility to their observations and points-of-view, and essential asset to the vibrancy of our cultural sector. 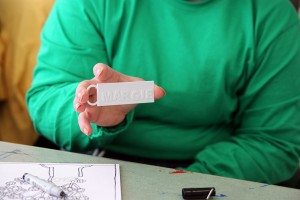 DHF staff members Amber, Jonathan, and Darius joined me in a visit to Make Studio to introduce a Tinkercad and 3D printing as a new form of making that potentially could be a new and inspiring process for artists to experiment with. Several artists got their feet wet exploring 3D modeling and how it translates to the ideas and imagery they use in their studio practice. 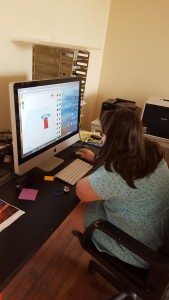 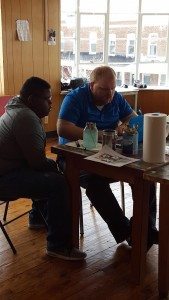 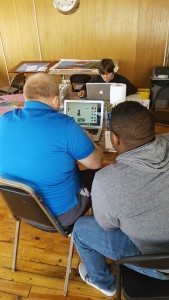 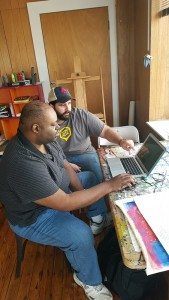 Jerry Williams, also known by his alter-ego “Partyman” is a long time member of Make Studio and an avid painter and sculptor often working with found materials. He is inspired by WWE, the circus, as well as superheroes, and for a long time has been developing a series of Batmobile inspired sculptures from styrofoam and found materials. Tinkercad was an interesting new opportunity to see how these designs would translate onto the computer with 3D modeling and into a 3D print. “This was my first time using Tinkercad, I could see this as a special feature on the Batman DVDs. I really enjoyed doing the tutorials in Tinkercad. I like working with new technology, this might be something I use to create a logo for my future art organization Williams Art Enterprizes. I would be interested in making more models of the Batmobile!” 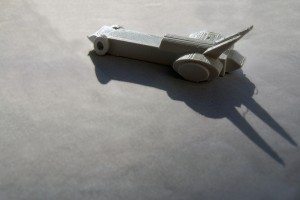 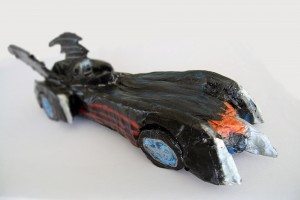 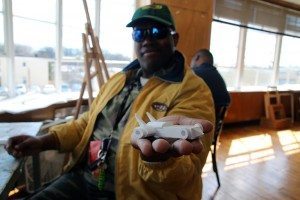 Aimee Eliason originally began her artistic pursuits in oil painting and has since explored a wide variety of mediums including painting sculpture, crocheting, digital art and photography.  She is fascinated by textures and can be inspired by something as subtle as the wrinkles on a piece of paper. Much of Aimee’s subject matter involves animals and/or anime, in Tinkercad she chose to develop (princess??) which not only turned out awesome, but also floored DHF staff members with how quickly she was able to pick up 3D modeling to create complex forms. “I loved Tinkercad and will use it again, there are so many exciting things to make!” 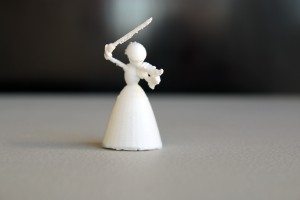 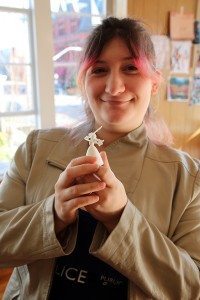 Similarly, Dasha Kalumuck who joined Make Studio in 2015 picked up Tinkercad very quickly and was able to make some really fantastic characters. Dasha likes to take ideas and concepts and put her own spin on them in order to give the viewer a different perspective and as an artist is often using these skills to create character designs. Dasha uses many two-dimensional mediums including watercolor, acrylic, markers, sharpies, colored pencils, and collage but through the workshop was very inspired by 3D modeling as well. “I enjoyed Tinkercad a lot, it was super easy and fun! I am definitely doing this again, definitely! I was happy to just jump in and try something new. Seeing things I designed turn into real 3D things I can hold is amazing!” 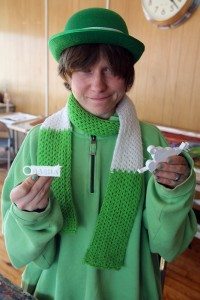 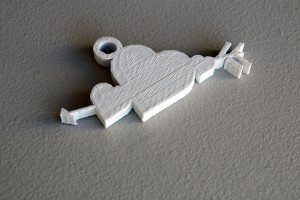 Louis Middleton often is found painting at Make Studio, but also has had a lot of experience working with computers. With the support of his family, Louis operates his own photo restoration business and has long enjoyed taking his own photographs, and now at Make Studio he is working to advance his computer skills, digitally manipulating photographs and original imagery, discovering new ways to express himself. Louis has many interests, but is often inspired by architecture and buildings he sees around Baltimore and that he finds online. After getting familiar working with Tinkercad, Louis tried out creating his own building based upon a painting he was already working on in the studio. “The experience was pretty good, I made a building from a painting that I have been working on and I had fun doing it” 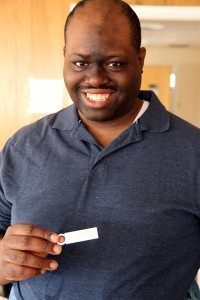 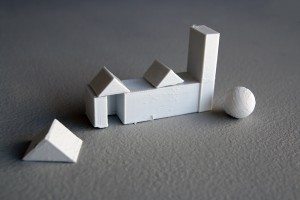 Margie Smeller knew a little bit about 3D printing before from her uncle who runs a makerspace in San Antonio however this was the first time she had the opportunity to try it out herself. Playing around in Tinkercad it was interesting to see how the colors and shapes drew similarities to the colors and patterns that can be found in her work. She was also able to create a 3D printed keychain for herself. 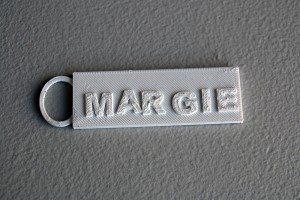 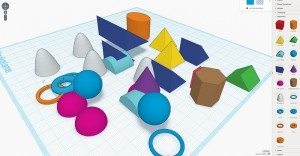 Gary Schmedes is a big fan of animation and is inspired by animation classics. In his work he primarily uses pen, ink, and watercolor and therefore was a little skeptical about any 3D modeling or computer based work. Despite this, he dove into Tinkercad, learning how to create different forms and ultimately produced this awesome print based on a character he has been working with. “Tinkercad was a good website, designing on it was neat. I designed a toad named Mr. Toad, although if I were to do this again I would have given him arms. It was really fun to create my own character in 3D, maybe for future projects I will use Tinkercad again.” 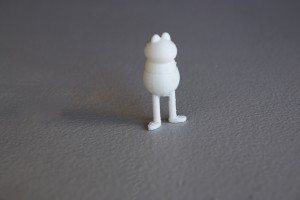 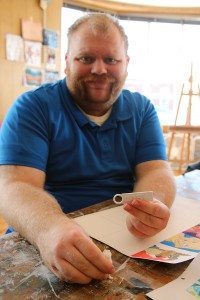 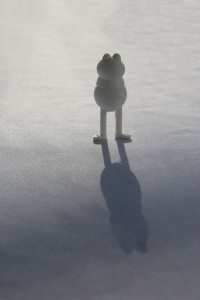 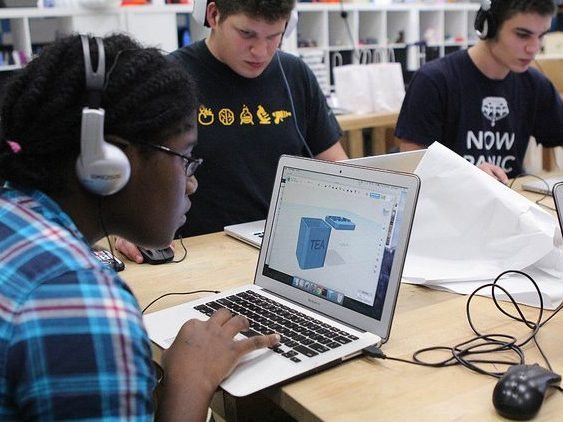 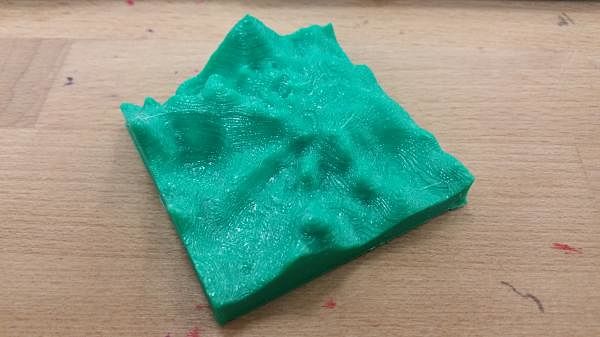 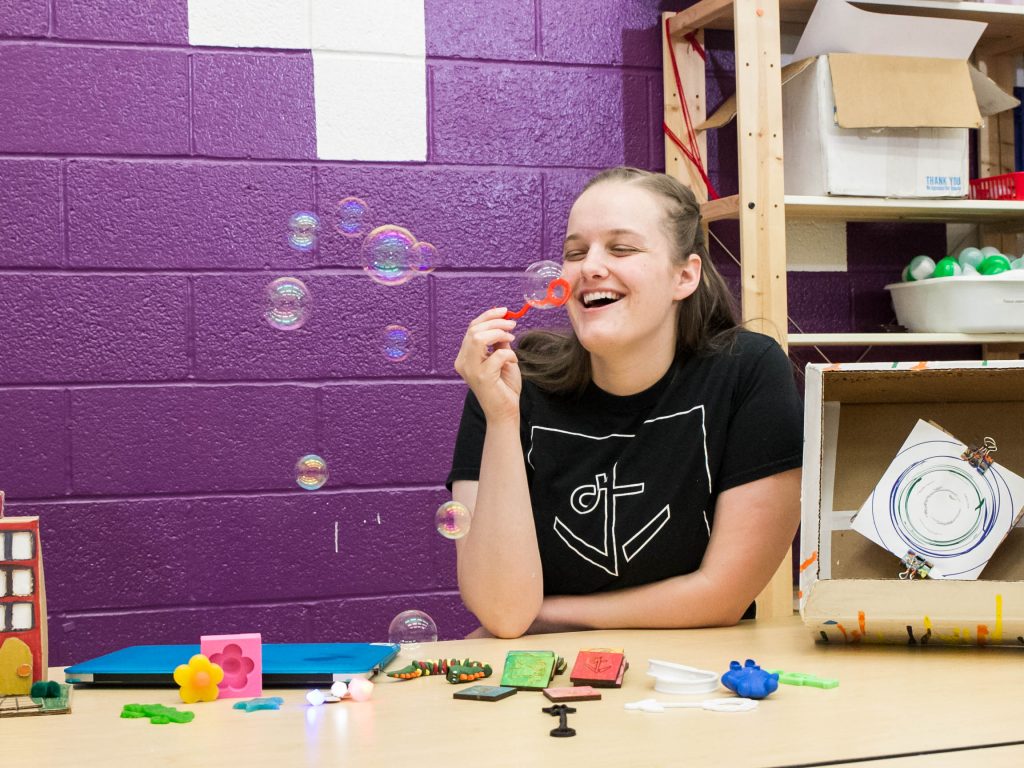