During my Youth Works employment at the Digital Harbor Foundation, I created an Arduino Hydroponics System.

I first began by researching hydroponics. Hydroponics is a method of growing plants without using soil. There are many different forms of Hydroponics. They range in size and complexity. Here are a few different styles:

I choose to do the Aeroponic variation of Hydroponics. Within this sector, I picked the five-gallon bucket configuration. It requires the least amount of space, money, time, and upkeep. It looks like this:

Essentially the bucket is filled with water and the pump sprays the roots of the plants with nutrient enriched water. After conducting some research I found a website with steps on how to build this project. To access this website click this link: https://gardenpool.org/online-classes/how-to-make-a-simple-5-gallon-bucket-aeroponics-system

The next step was to create a project proposal and action plan. My action plan included the materials, their costs, and step by step construction of the buckets. Next, I began to assemble the buckets. I used the hole saw and a power drill to put holes in the top of the bucket. I could not find the guide for the hole saw, which complicated the process of drilling holes. The incorrect guide kept falling out. I thoroughly rinsed and sterilized the buckets to remove any debris. I cut the bottom out of the net pots with an Exact-o knife so that the roots could hang. I rinsed the hydrotons, which are clay pebbles used as a soil alternative, to remove all of the residues. The pump was placed in the bottom of the bucket and the cord was fed through the hole in the top. I filled the bucket up with water and added the nutrient solution into the water. Then I placed the net pots filled with hydrotons into the holes in the bucket. I plugged the pump into a timer so that it would turn on at certain intervals. When assembling the bucket, make sure to rinse all plastic shavings, dirt, and residue from the bucket to keep the water clean.

The buckets needed to be placed somewhere with space to hang the grow lights at varying heights. The area should have enough space so that the buckets are out of the way. At the tech center, I chose to locate the buckets in the kitchen. There wasn’t a place to hang the lights so I created one. My supervisor helped me use the circular saw to cut some wood. Then we placed wood blocks up and down two vertical planks with space to slide horizontal planks in between them.

To control the lights I created an Arduino switch. Shawn showed me how to use a simple blink program that turns the light on and off every twelve hours. I planted tomatoes, rosemary, peppers, curry, basil, and thyme. This is the final result: 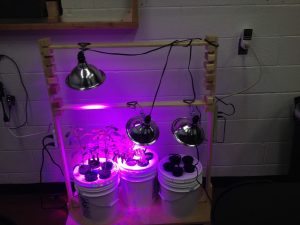 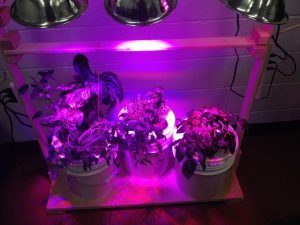 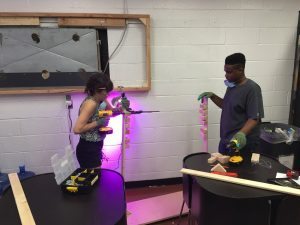 To take care of the plants you only have to check the pump and add nutrients every two weeks. Just make sure the roots do not grow into the pump and water is reaching them.  After I my session at Youth Works ended my plants died. The nutrients I was putting in the water were not concentrated enough to maintain mature plants. I had to completely scrap the buckets. In February of this year, we planted some strawberries in the bucket. we made some changes to the feeding schedule and the nutrients being placed in the buckets  The strawberries are doing well and we even ate some of them. 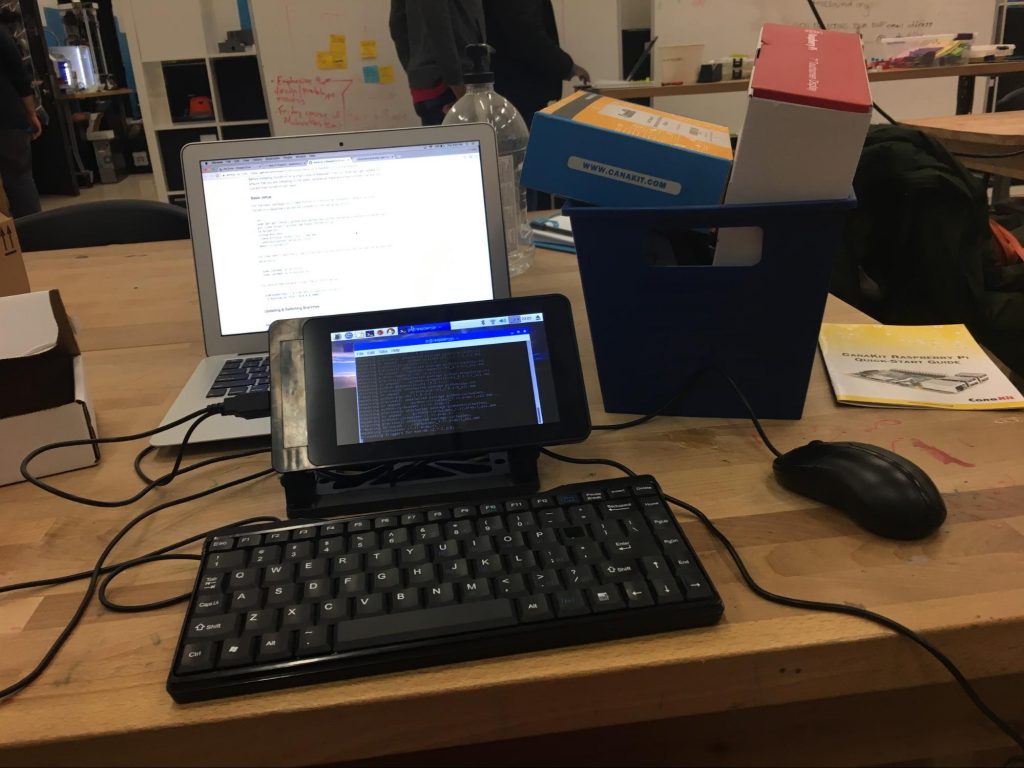 Hi! I’m Bella Palumbi. I’ve been a member of the Tech Center for almost four years now, ever since I was eleven. In that time, I’ve worked on lots of different projects, including iPhone apps, websites, virtual reality experiences, and much more.

Recently, I made a Raspberry Pi Time Lapse Camera. A Raspberry Pi is little computer that you can program to do almost anything you want. They’re great for small projects because they are cheap, light, and versatile. For my project, the idea was to make a camera that takes a picture every few seconds. You can play all the pictures in a row to see a time-lapse of the user’s day. 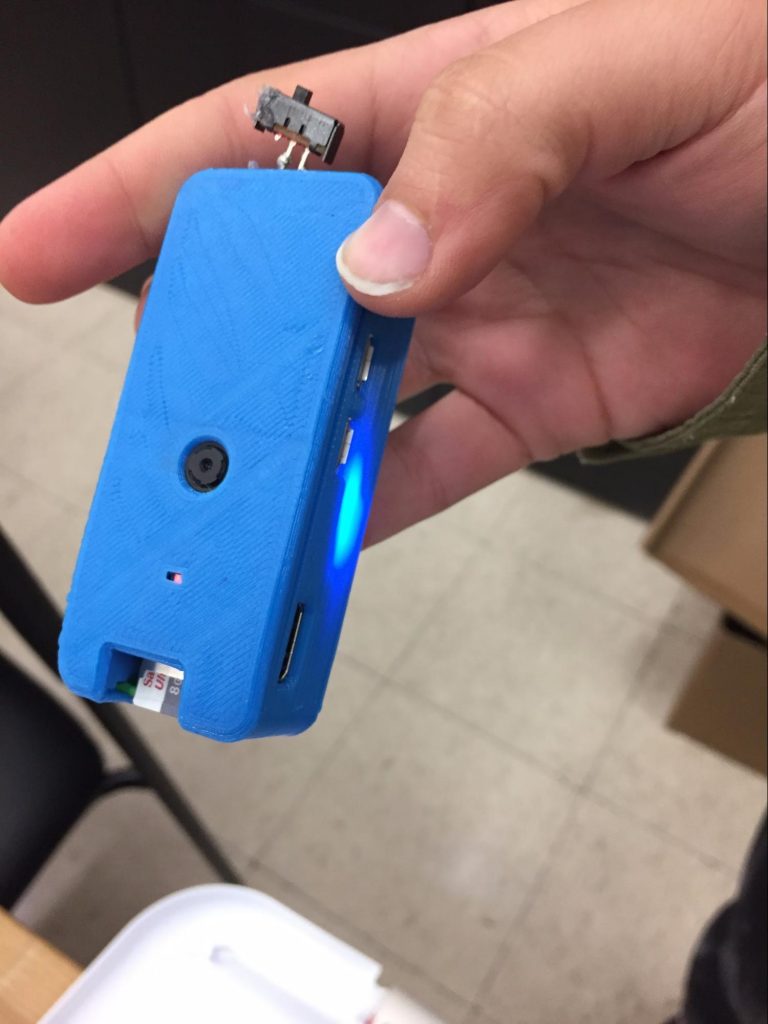 The first step in the project was to burn the correct .img file onto the SD Card, which would be inserted into the Pi. An .img is an operating system. I used a program called ApplePi Baker because I was using a Mac computer.

The next step was to prepare all the wiring. I needed to solder together many different components including a button, a switch, a battery, and, of course, the Pi itself. All the wires and components had to be connected in the right way. The Raspberry Pi is very small, and I was actually using the Pi Zero, which is even smaller. So it was hard to be extremely accurate with the soldering iron. I probably spent most of my time soldering and re-soldering the wires!

It’s cumbersome to carry around a jumble of electronics and wires, so the tutorial came with a 3D design file to print a case for the time-lapse camera. The easy part was printing the case. The hard part was fitting all the pieces inside. I spent about an hour rearranging little tiny components in a little tiny plastic box. A couple times, the solder holding the wires together broke and I had to re-solder them. When I finally got the box closed, I was praying that it would work.

It did! When I turned the device on, after it booted up, it started taking pictures every 15 seconds. That didn’t seem often enough, so I took out the SD card, plugged it into my laptop, and brought up the code. By changing just one number, I was able to set the time interval to 10 seconds. Then, I booted up the Pi again. Still too slow. So I set it to 5 seconds. That seemed about right. Just for fun, I also tried a 1 second interval. The LED that blinked whenever a picture was taken was solidly lit now. The Pi couldn’t process fast enough, and was barely able to shut down. Finally, I set the interval back to 5, the number that worked the best. 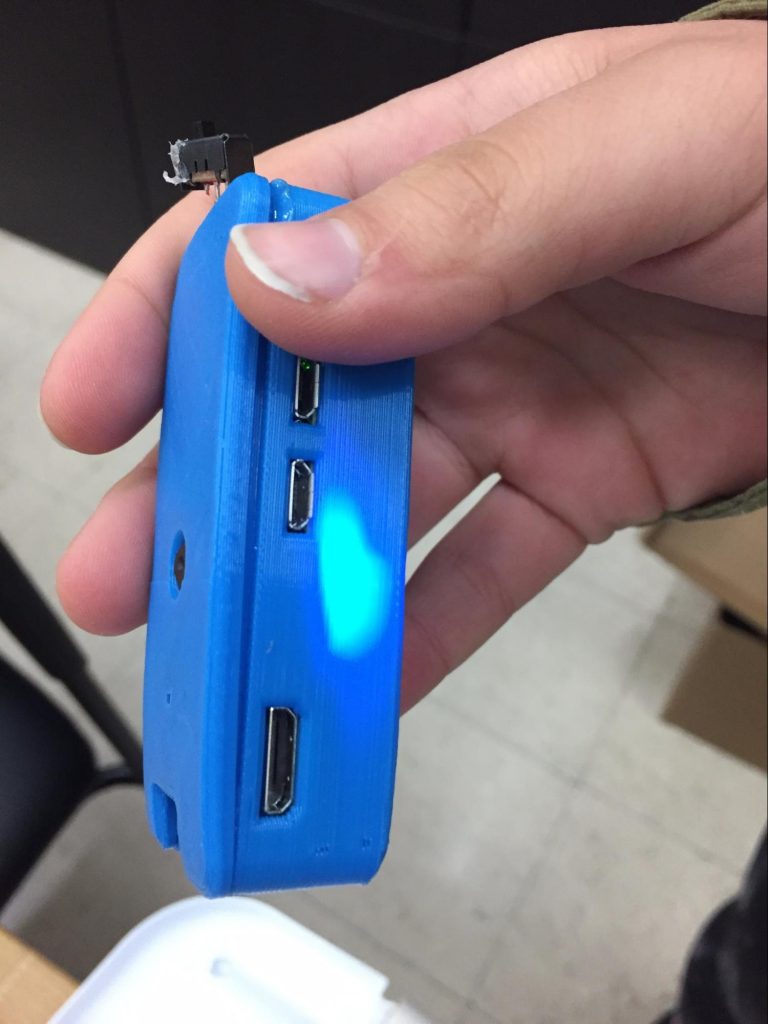 All in all, it was a fun project. I’m sure there will be some really amazing time-lapse videos of projects that we work on at the Tech Center.

Digital Harbor Foundation is a leader in educational technology training for youth and educators. Through the Innovation Access Program, we we would like to expand access to innovative technology, resources and training to an increasing number of educators.

Announced in the White House’s New Commitments in Support of the President’s
Nation of Makers Initiative to Kick Off 2016 National Week of Making and in partnership with Printrbot, MatterHackers, and BuildTak, we would like to expand access to our educator programs by announcing our commitment to provide a free 3D printer and accompanying multi-day training to one educator from every state.

Our technology workshops help educators, in both formal and informal settings, learn what they need to know to comfortably control (and troubleshoot) a 3D printer and incorporate iterative practice, 3D design, and 3D printing into their own curriculum. And with the help of this program, our hope is to increase access to other educators on 3D printing.

For details on what is covered in the workshop, please see this page and when you are ready, head over to complete the application.

What others say about our 3D Printing Workshop:

The staff were super friendly and so enthusiastic. In 23 years of teaching, this is the best Teaching/Professional Development course I have taken. 3D printing and DHF inspire creativity! The time absolutely flew and I couldn’t wait for the next session.

The workshop is great. I really wish I had been able to participate when I first started working with a 3D printer…

The amount of hands on time with the printers was perfect. I really liked the various pathways we explored on generating stl files, especially doodlefab.

I was not super excited about attending this workshop ahead of time as I was not sure how it could relate to my program. I also had envisioned that the 3D printer would be huge and not able to move to the different sites where I have my after school program. I was quickly proven wrong. I learned so much this weekend and am so excited about taking this incredible resource back to my after­school program. I have come up with a whole bunch of lesson plans and am going to start right away. Thanks for a great workshop.

The workshop is exactly what is advertised. It will give educators at all levels understanding technology with the tools to learn 3D printing. It was the right amount of hands on and informative.