More than 200 youth, parents, and community members attended Digital Harbor Foundation’s 5th Anniversary Showcase, one of our highest attended showcases to date. Youth presented projects such as a flashlight made out of recycled materials, an Arduino programmed lamp, and an Arduino-powered cardboard gauntlet. Sam Mitchell, Sorensen Wynn, and Eli Edmondson used Python programming to create a multiplayer game in Minecraft. The object of the game is to destroy bricks under another player in order to increase your own score.

“I walked away for a couple minutes and when I came back, everyone was playing it!” said Sam.

Jordan Bocklage programmed a headband with wipers for her glasses, a project she had been wanting to make for the past two years since she took the Maker Foundations course. Right before the showcase, she couldn’t find the code to make the wipers move in unison and had to problem solve an alternative way to achieve her desired effect. After she showcased her work, Jordan told her parents and staff that this was only one version of her final work and that more prototypes were to come.

Mayen Nelson used his knowledge of circuitry and digital fabrication he learned in Maker Foundations to create a working laptop using a Raspberry Pi. Mayen worked down to the wire perfecting measurements for his laptop’s frame and finding a screen that worked the way he intended. 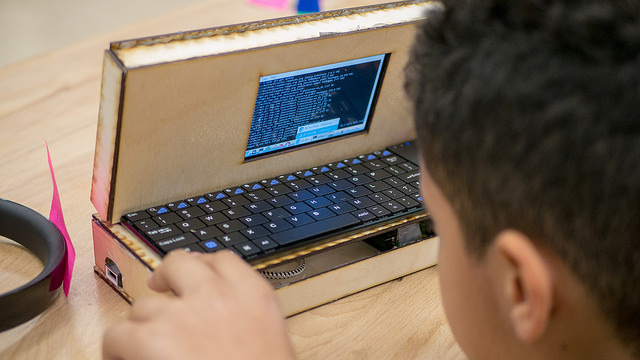 “We came to work every day to a mostly empty space,” said Director of Programs, Steph Grimes.

Since then, DHF has expanded to offer courses in digital fabrication and programming to youth from 90 schools in and around Baltimore as well job opportunities and college credit. Several youth have presented projects at the White House and, last year, a DHF project inspired Adam Savage’s SXSL installation. Youth have also championed initiative such as Makerettes, the 3D Print Shop, and Harbor Hacks, the first Baltimore hackathon created by youth for youth. 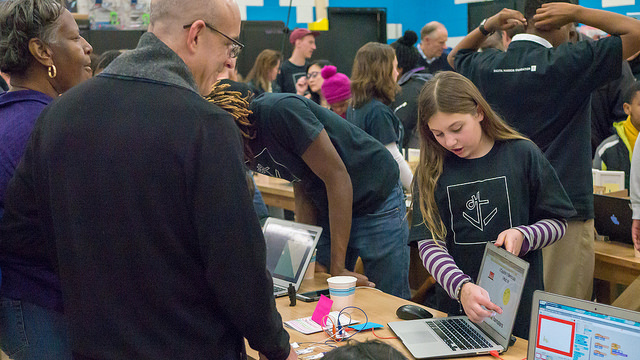 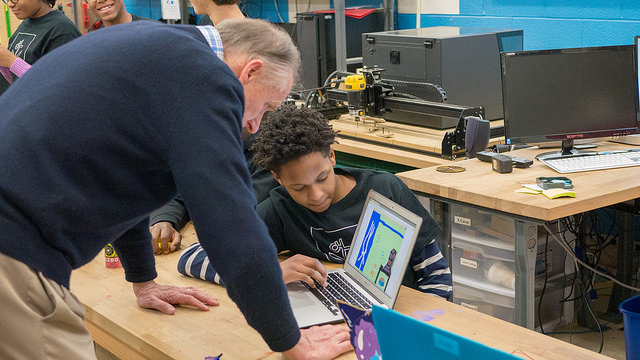 Andrew Coy, DHF’s Executive Director, unveiled the new Expanding Tech Education Initiative, a plan to explore expanding informal tech education for underrepresented communities using makerspaces. The initiative will be funded by a research grant from the National Science Foundation EAGER program. Three sites will be selected to participate in the 18-month pilot program. Each site will receive $25K in new equipment and consumable material for curriculum implementation. The intention of this research is to find ways to create sustainable and diverse makerspaces in communities that could benefit from them.

On Thursday, February 1st at 4pm, DHF will host a conference call that will go through the details of the program and the selection process. If you’re interested in learning more information about DHF’s plans and process for the initiative, RSVP for the informational call!

The Spring 2015 cohort of Maker Foundations is now in full-swing!

This newest group of 54 youth have persevered through the winter weather disruption and have begun to create amazing things! The Mega Lab is continually buzzing with excitement as the Maker Foundations youth are eagerly learning new technology skills.

As an introductory Maker activity, the group was tasked with creating “a robot that draws.” No additional information was provided other than the limitation of one electric toothbrush and the option to use only up to four markers. Programming staff decided to not show any pictures of previously completed Artbots because we wanted to see what the youth would create. The incredible creativity of the youth was demonstrated through the range and variety of design. Everyone enjoyed putting their creations to the test, and the cohort began to share their ideas and designs with each other. 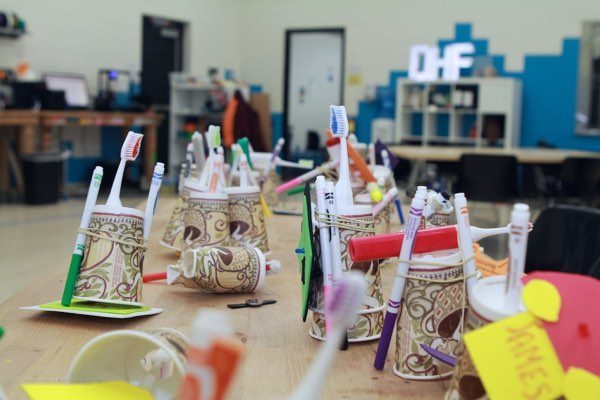 The youth also were eager to learn about Internet credibility through participation in a fact-finding activity called “Release the Kraken” where they evaluated the reliability of online sources to determine whether or not the Kraken is real, imaginary, or somewhere in the middle. This activity spurred a great group discussion about online credibility where the youth had to defend their claims based on their sources. 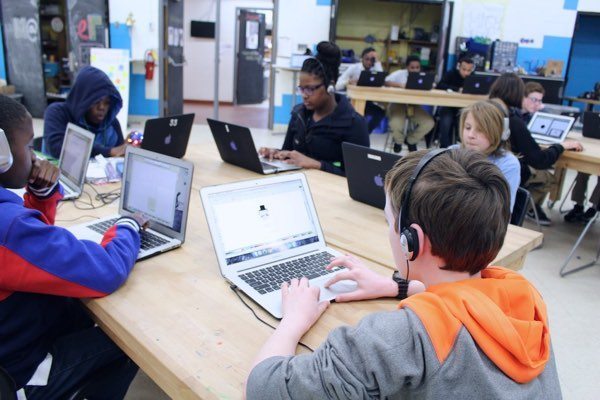 This cohort is particularly interested in sharing their ideas and processes. At the start of Maker Foundations, we ask each youth to write their thoughts about what they think being a Maker is, and then put their post-its on our decorated Maker whiteboard. Everyone was excited to write down their answers, and many of the youth included their names so that their peers could see their responses. 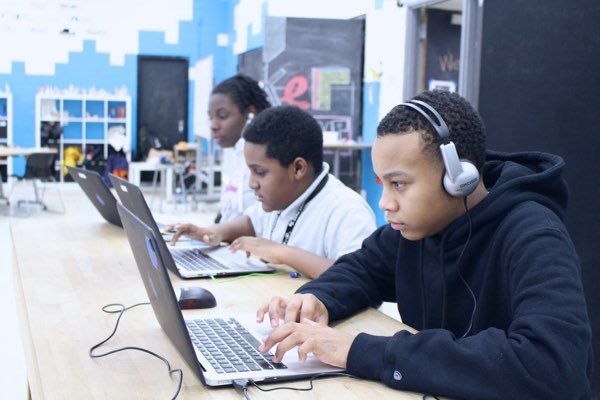 The youth are beginning the 3D Printing lesson in the next week and there is already lots of buzz and discussion about what they’ll create! This is always a popular module with the new youth, and this cohort is demonstrating the same eager anticipation.

We’re all looking forward to seeing what the Spring 2015 Maker Foundations youth will create in the upcoming months!