At the beginning of the fall season, the Makerettes, DHF’s all female maker club, began plans for a collaborative community project. The basic framework of their plan was to involve the community in an ongoing project. At first, this simply involved creating an outdoor exhibition, but the Makerettes decided that they wanted to provide a more personal benefit. They decided that they wanted to create a fundraiser for another organization providing value to marginalized people in Baltimore. The initiative set forth by the Makerettes was to design and fabricate intricate tea light lanterns that could be displayed in the courtyard and sold online. All of the proceeds would be donated to the House of Ruth, a domestic violence shelter for women and children in Maryland.

“Especially during the holiday season, the Makerettes wanted to make something for people other than themselves,” said Makerette, Sydney Lane-Ryer, at the Be the Light launch event on Wednesday, December 13th.

The House of Ruth was the Makerettes’ chosen charitable organization because of the work it does for women in the Baltimore region. As a female-founded and operated club, the Makerettes wanted to show solidarity with another female-focused organization. 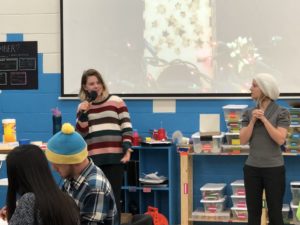 “The idea behind the Makerettes is that there aren’t enough women in tech,” said Sydney, “At DHF, we are 50% female, which is a higher statistic than is seen at many other tech corporations and businesses around the nation. The Makerettes increases retention of girls in DHF’s programs.” 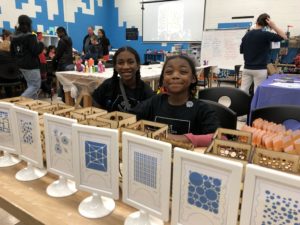 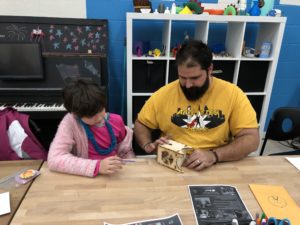 Nearly fifty lanterns were sold at the Be the Light launch event, which raised more than $500 for the House of Ruth. The lanterns that were donated to DHF will be displayed in the courtyard as part of the Be The Light Installation on display at our 5th Anniversary Showcase on January 18th. Lanterns will be on sale at that event, but you can also purchase lanterns now by visiting: dhf.io/lanternkit.

Women today are often faced with the challenge of being largely underrepresented in the tech world, but at DHF, in contrast, women represent around 40% of participants in programs semester to semester. In an effort to give girls a platform in STEM, the young women of DHF partnered with Wide Angle Youth Media at the end of August to create a short film for the United Nations’ International Day of the Girl Child initiative that showcases young women of different ages and demographics making in collaboration. 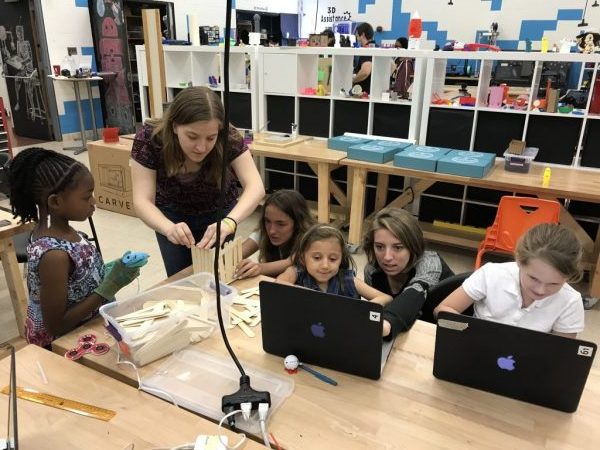 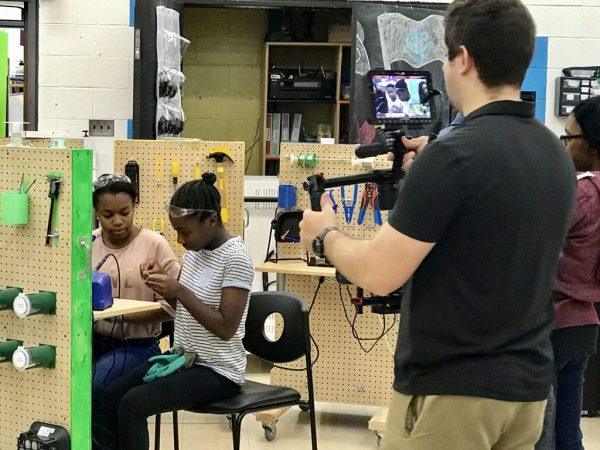 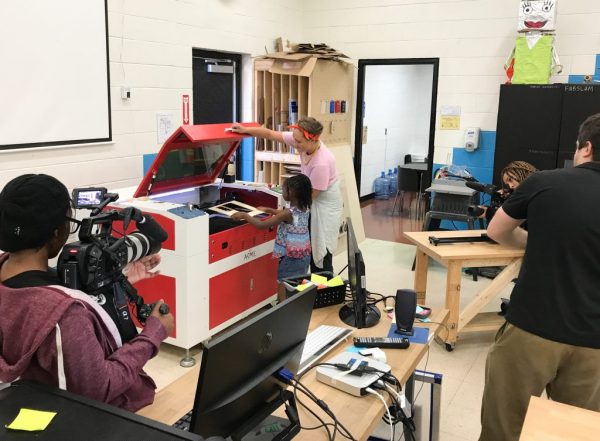 On October 10th, the short film was released at the Digital Harbor Foundation in our first ever video premiere event. Members of the audience included families of the young women who starred in the film and community members such as Brooke Lierman, Maryland State Delegate representing District 46, who spoke on the importance of persistence, especially for young women. Said Lierman, “the next best thing to trying and winning is trying and failing.” 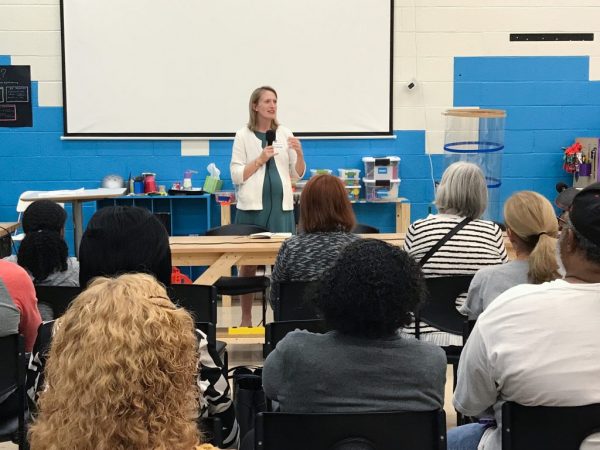 The film screening, which also began DHF’s social media campaign for female youth’s representation in makerspaces and tech spaces, features DHF youth Miranda Hull, Jordyn Bocklage, Elizabeth Blake, Madison Bannerman, and Aeirss Prince, Anna Miller, Samantha Nistico, and Alexis Leggette. It shows the girls engaging in activities, such as problem solving, programming, laser cutting, and soldering, and features an encouraging message to girls – although only 24% of employees in math, science, technology, and engineering are women, young women can change this statistic by working together and rejecting the stereotypes that their minds aren’t wired for math and science.

Before and after the screening, two panels of DHF’s actresses answered questions posed to them about the process of creating the film and their experiences as young women in tech. When asked how to get more girls involved in tech, Aeirss, who narrates the short film, said “I would encourage girls to just go out and do it.” She also shared her story of being the only female participant in her school’s robotics club. Miranda had a similar experience of being one of the few females involved in her school’s Science Olympiad program. 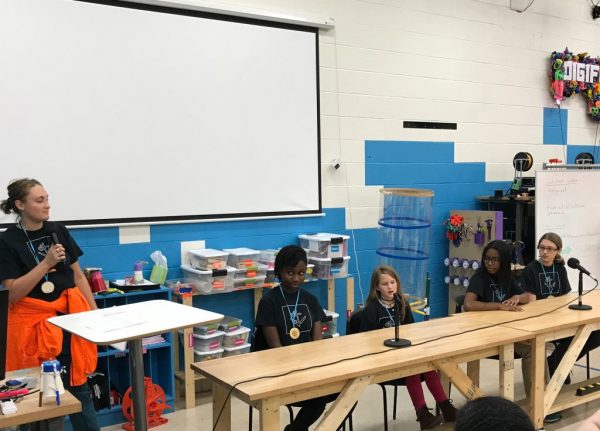 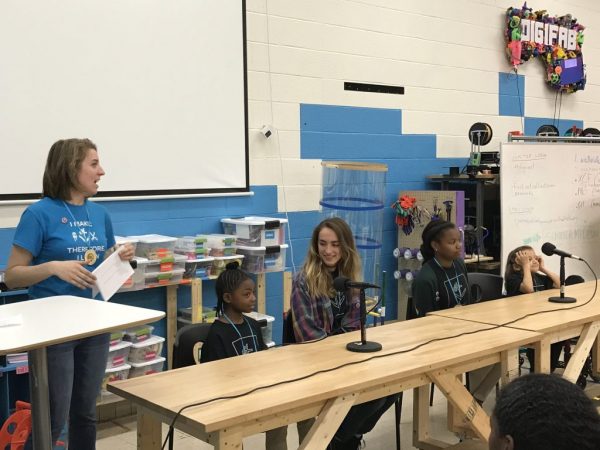 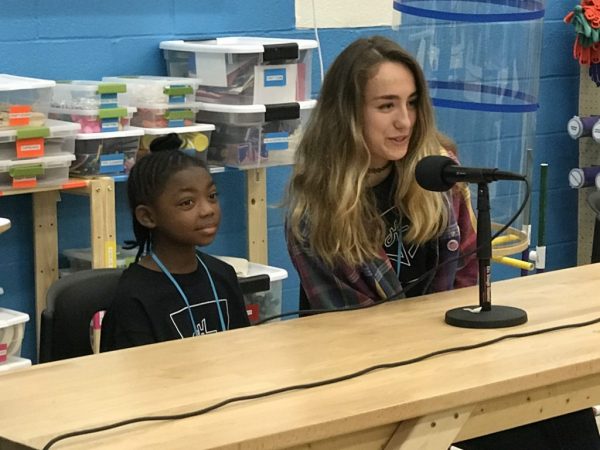 “The innovative and creative scene is male dominated,” Miranda said, “Women are underrepresented, but we will eventually dominate the scene.” 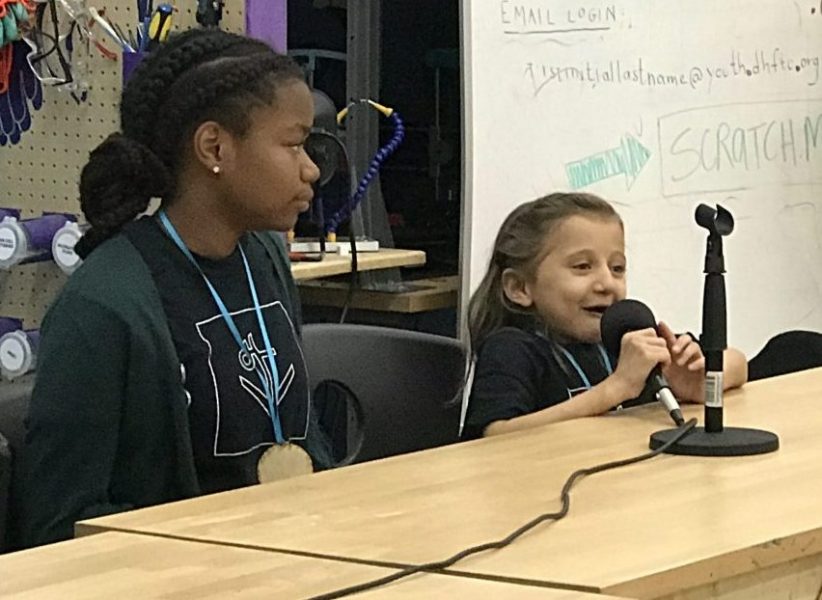 Anna, age 10, closed out our panels with advice for getting more girls involved in STEM fields: “Tell girls when they’re doing a good job, listen to girls, and as girls help each other out, share ideas, and see what we can make.”