I began working with littleBits at the beginning of the 2nd quarter. I’m a junior, so at this point I am looking into colleges or tech schools. I realized that I want to be involved with engineering. Taking up a computer programming class would look good on my transcript. However, it turned out to be more involved than I thought. I thought having a small class would make it a breeze. I quickly found out different when my teacher told us we would be presenting to the elementary classes. I found it easy to follow plans giving to me, but I struggled to make plans for these kids.

My teacher gave a presentation to the kindergarteners, while my class and I got to see an example of how we were gonna do this. 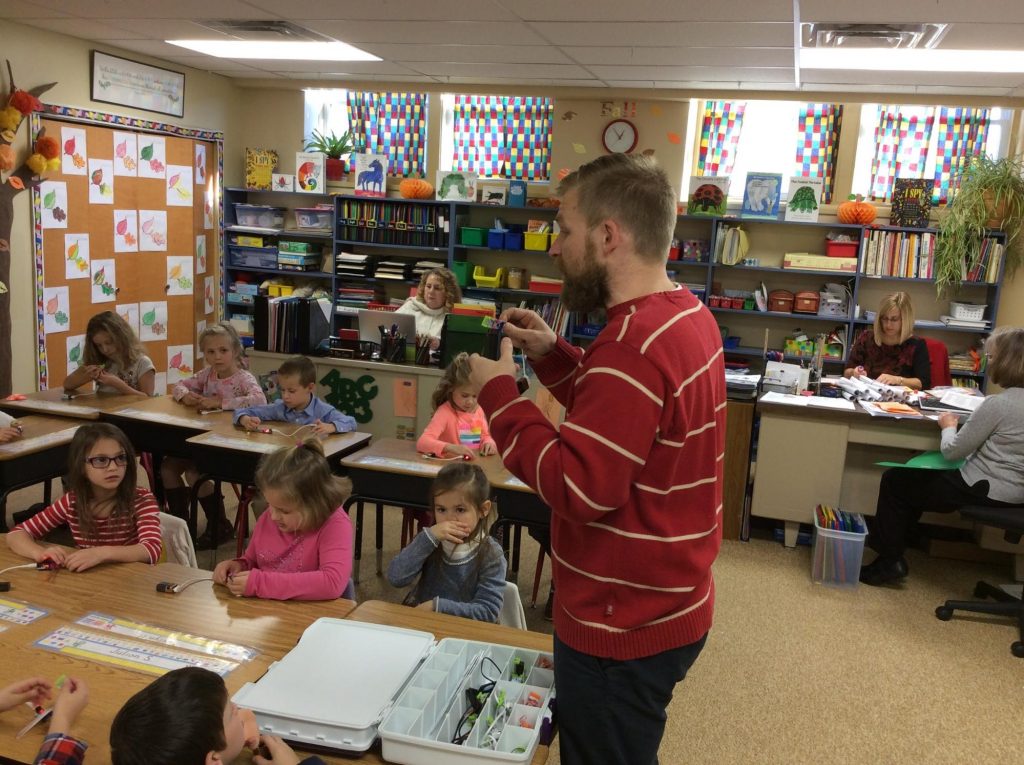 I had little experience with littleBits, but I used this opportunity to teach other kids while learning myself. I started off my presentation explaining what littleBits are and the meaning of each color of the parts. The kids were very eager to play with them, which was exciting for me. After I explained how they worked magnetically together, I gave the kids one of each part and let them see what they could do. They were very excited to switch parts with their friends to see what they could create.

Here, two of the girls I worked with had switched parts with each other and were seeing how they could use their power to control their outputs. 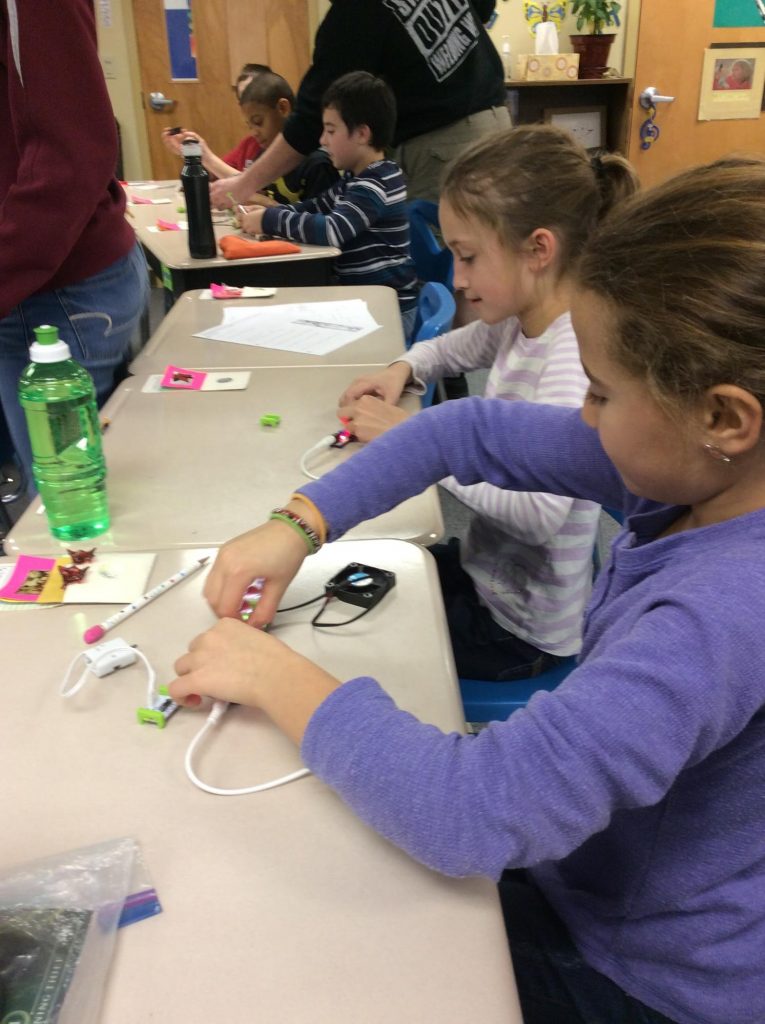 I had put the class into groups and this group of boys were working on how to make a circuit to make the fan go. They switched parts with other friends to find the right ones they needed to complete the challenge I gave them. 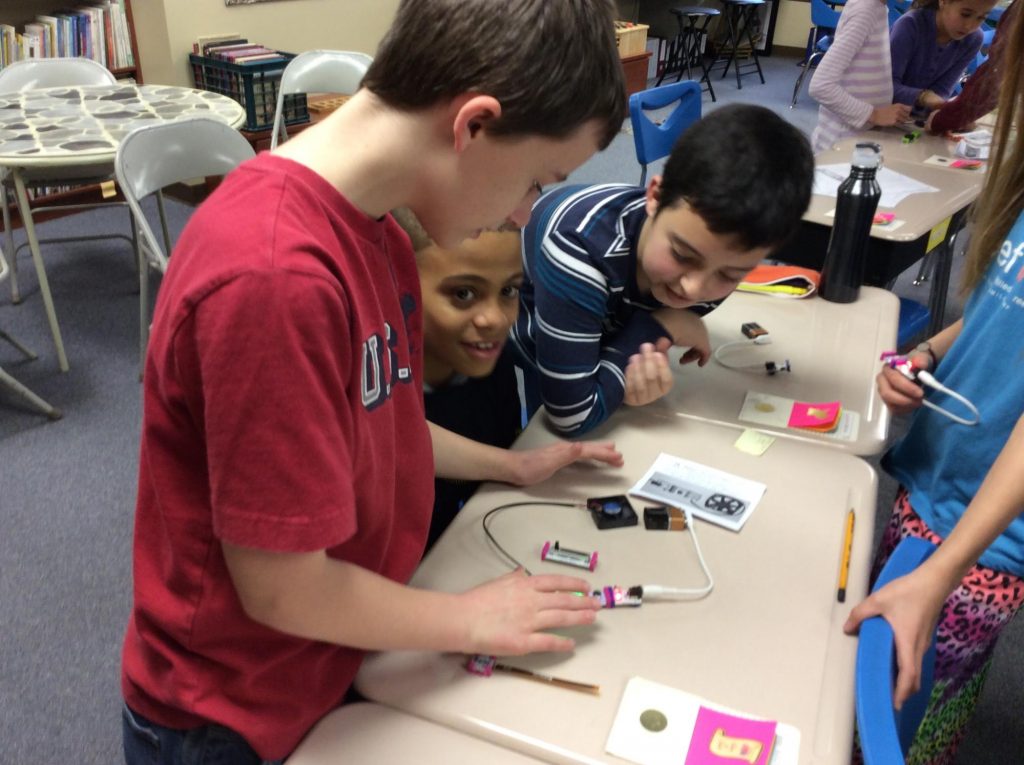 It was so great to see how smart these kids were and how interested they became in these electronics. Introducing littleBits to this class was a learning opportunity for both me and the kids.

Ever since I was very little, I have been fascinated with building things. As a result, I got into LEGO products at a young age. That interest has stayed with me throughout my childhood and remains prevalent in my life to this day. Earlier this month, my class learned that we were entered in a competition and that we had to work on a birthday-themed project. When we decided on the concept to build a celebratory parade, it did not take long for me to decide that these building blocks were the best material for me to use to complete my part. 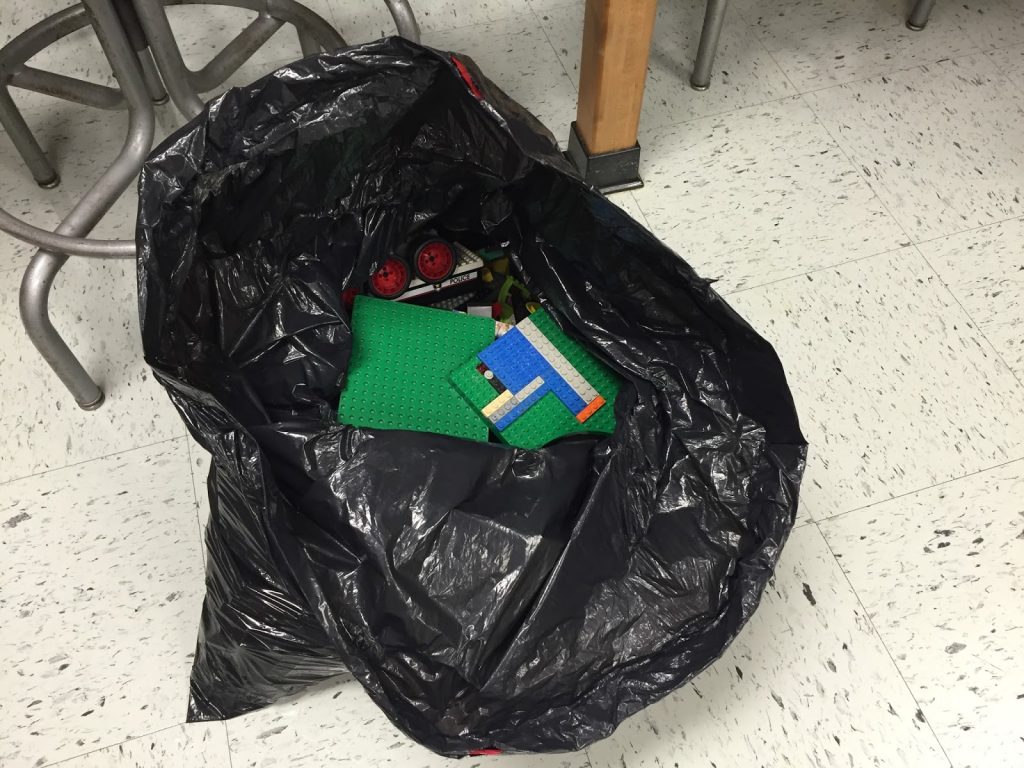 I began my work soon thereafter, primarily selecting pieces from the large bag pictured on the right. Although I had a few different design variations in my mind, they all shared the same basic features. I would construct a long, thin platform out of the biggest plates I could find, then add wheels under it. Next, I would use pieces to spell “Happy Birthday!” twice to be visible on both sides of the float. I planned ideally to use translucent pieces so I could shine lights through them, and a surprisingly convenient visit to the LEGO store in Philadelphia supplied me with plenty of 1×1 translucent red pieces to use. Below is the result of experimenting with them. 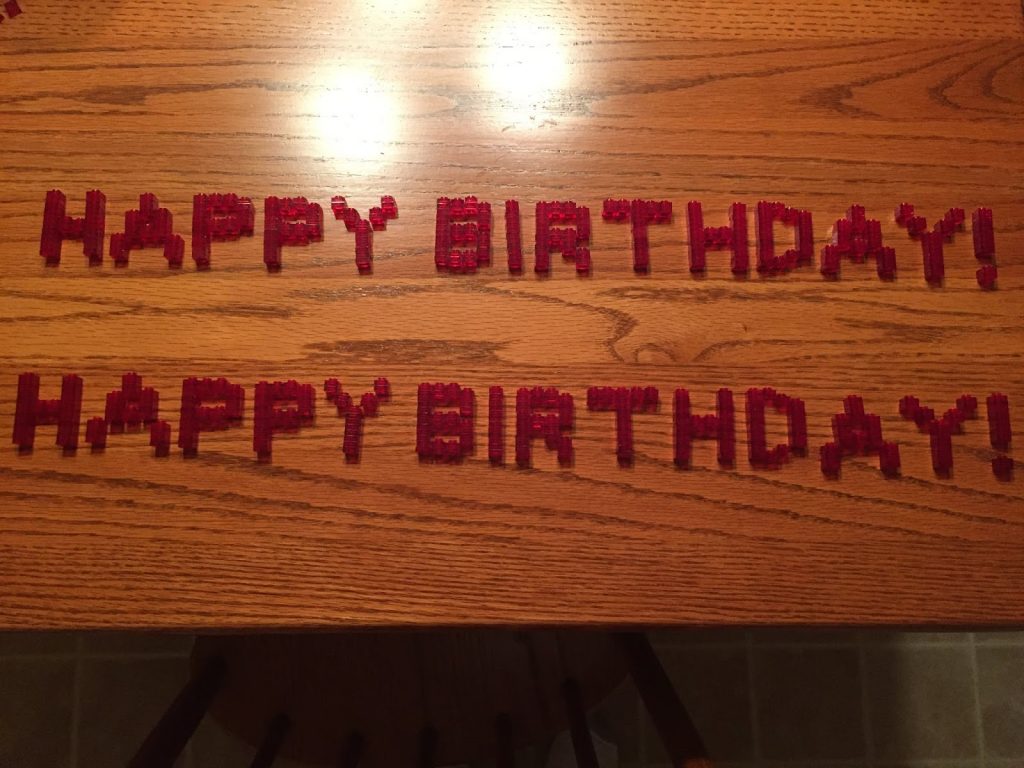 My work to prepare the two sets of words at home stalled because of the lack of sufficient bricks to fill in the gaps. Meanwhile, in school, the float itself was coming along well. The platform and first set of wheels were finished within the first session of work. The picture on the left shows the status of the float after a couple days of building. The platform and the eight wheels necessary to support it are ready to go but still need some tweaking. 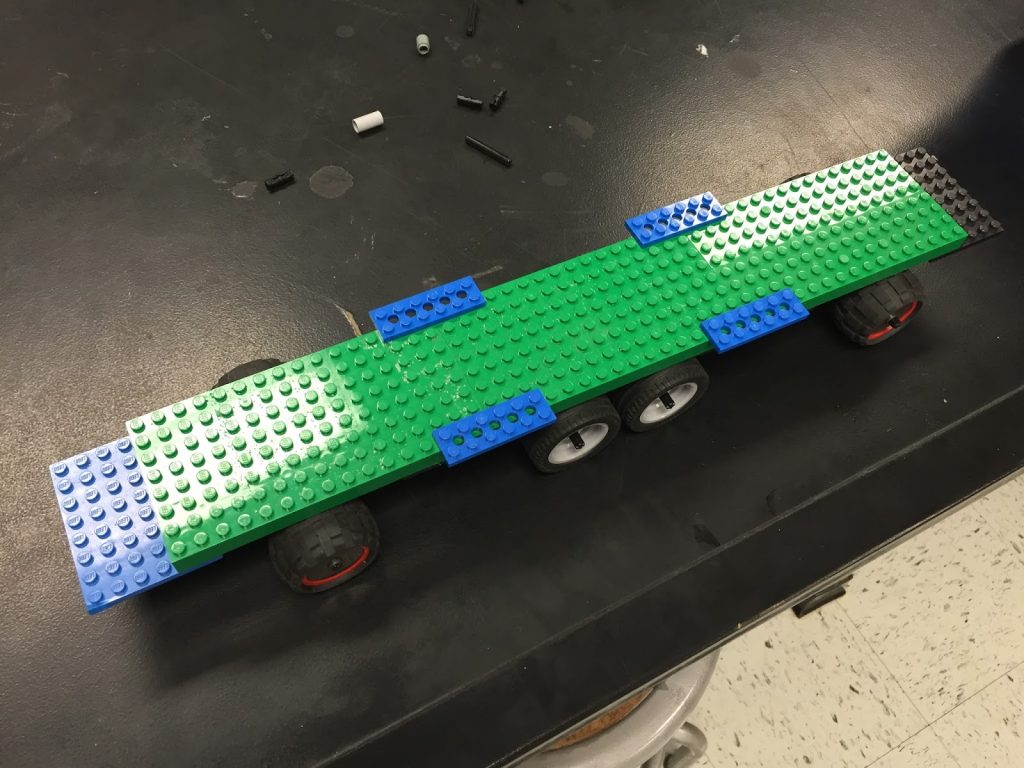 By the time I was this far on the float, I had also gotten enough white pieces that I could begin filling in the words for the float. Following several hours of tedious, frustrating manipulation of pieces, each of the two birthday messages look like this:

This second portion of work began when I brought together the two separate LEGO builds at school. I had added walls around the two LEGO phrases to form a three dimensional structure that would fit over the float that had been waiting. Unfortunately, this process became much more complicated than I had expected. 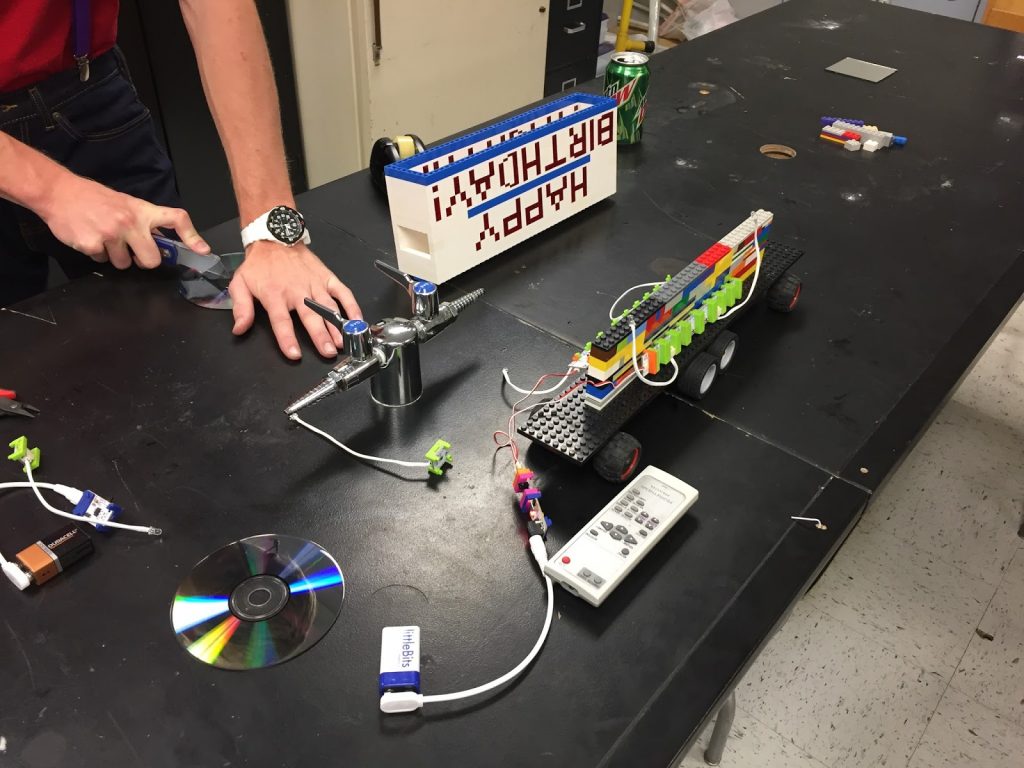 The workspace eventually came to look like the above picture on the right. Several of us worked together to figure out this struggle. Everything was going according to plan until I realized the circuit intended to produce the light would not stretch the length of the entire phrase. This sparked a long series of experiments to see what might possibly diffuse the light most effectively. The two most effective were the ideas of wrapping the middle Lego wall in aluminum foil and cutting up CDs to tape them inside the walls. Below are two pictures of the project “looking sharp” with all its reflective surfaces. 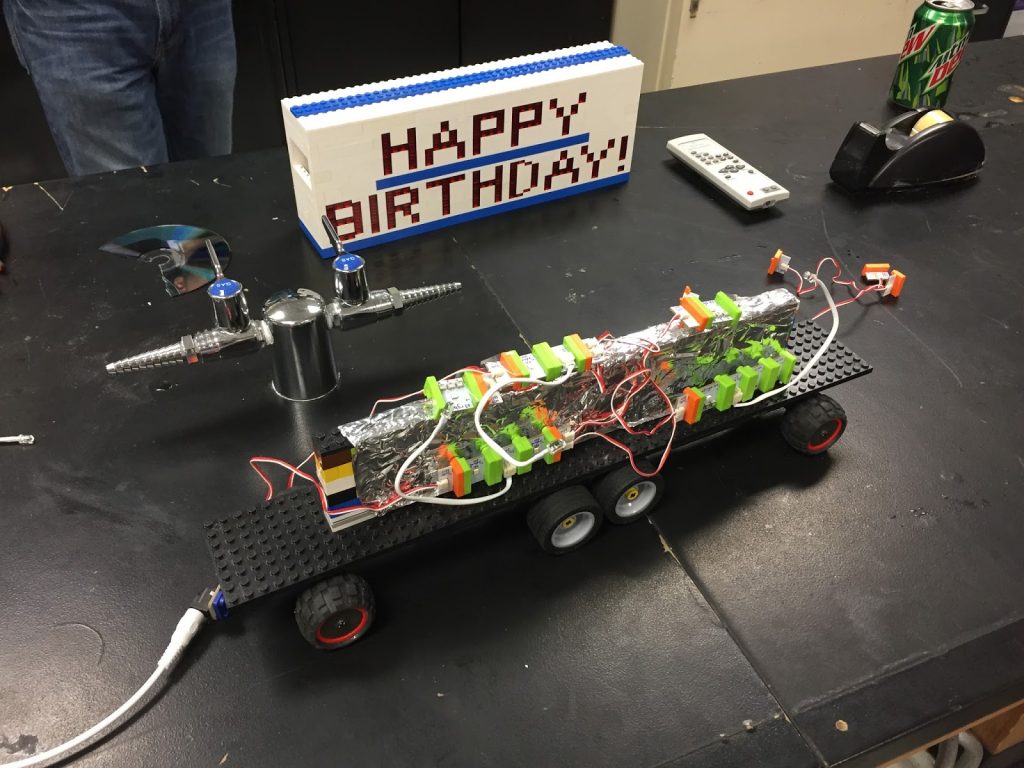 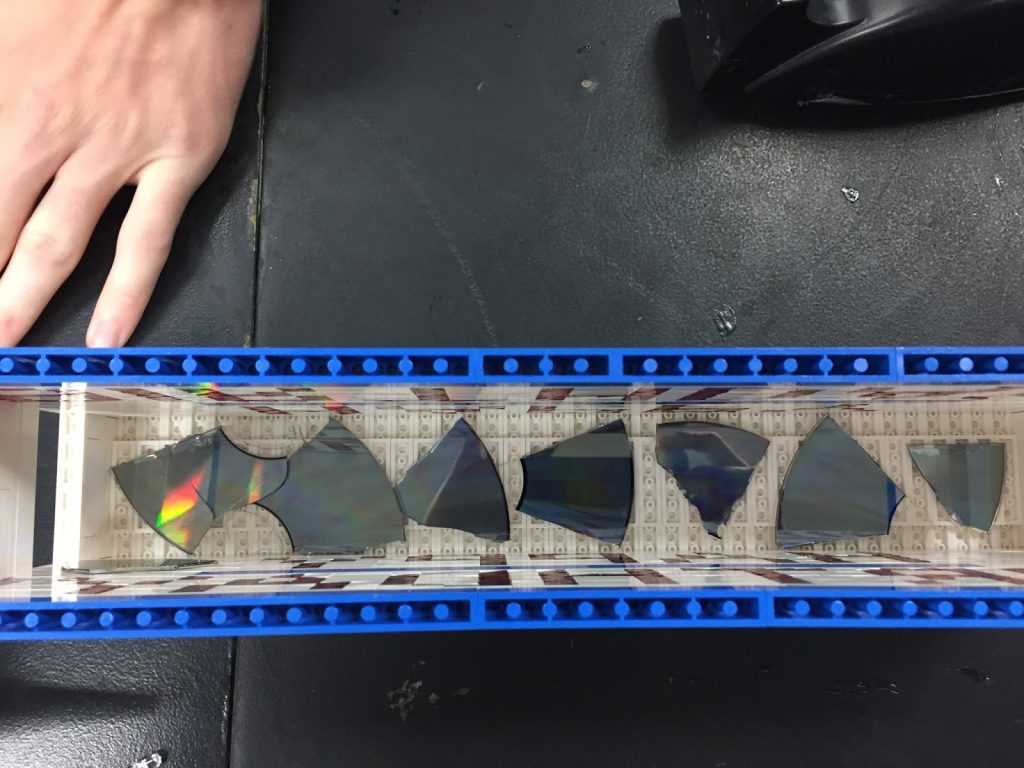 With crisis averted as efficiently as possible, we pressed on to fit the top onto the base of the float, which proved to be much easier said than done. Adding another layer of baseplates did not help much. We soon resorted to duct tape for aid. After several minutes of frustrated pressing, however, the pieces finally stayed together, and our test of the circuit was successful. Now the only part remaining was to connect all our floats to make one big parade. 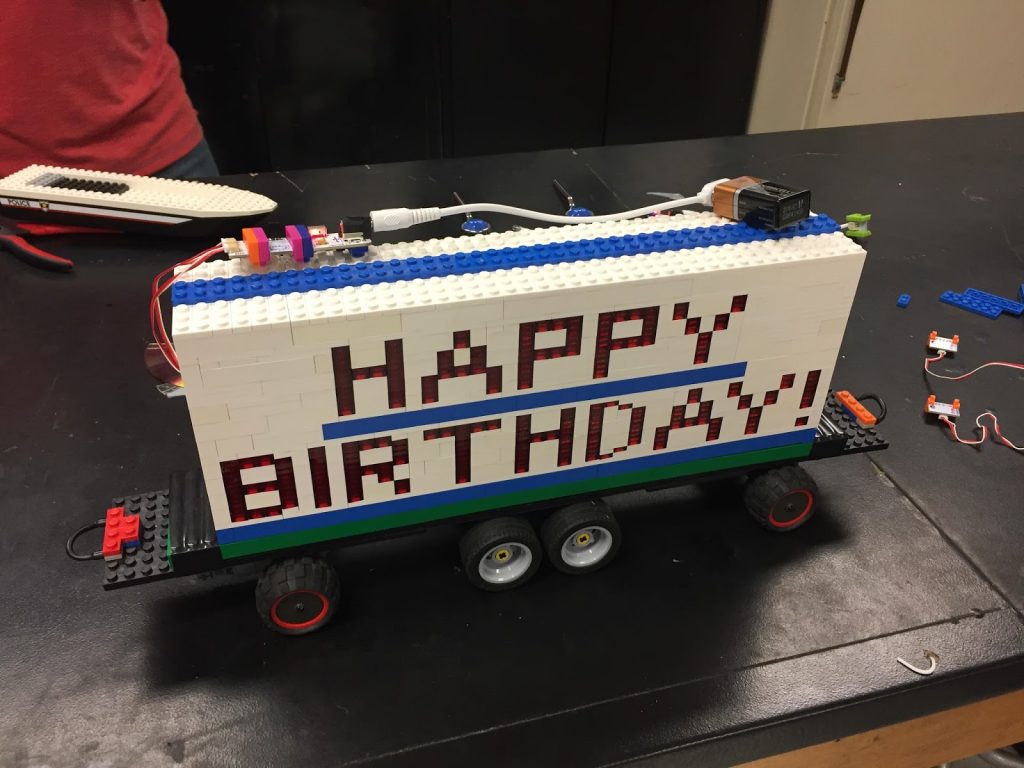 My class completed the procession and submitted it for our competition. While I am interested in finding out how we did, I am satisfied anyway because of the unique opportunities I had in this project. It is not often that a high school student gets to play with LEGOs in school and actually say he is being productive. The LittleBits were fun to work with as well. Even though I was totally new to them at the beginning of the year, I got used to them quickly and enjoyed being able to combine them with the Legos I have been using for years. This project was very fun for me, and I look forward to the chance to build using these materials again.
To see the whole parade in action check out these 2 videos:

Here are some resources to get you started with your LittleBits hacking: