When Sierra Seabrease first enrolled in programs at DHF in the fall of 2013, she wasn’t interested in pursuing a career in tech. “I wanted to be a traveling photographer for National Geographic,” said Sierra, “I thought tech jobs were boring desk jobs with Microsoft Office. My mom sort of pushed me into it.” 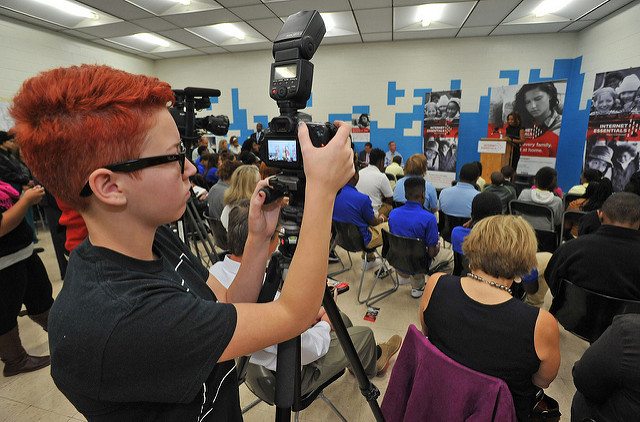 The group of youth that started with Sierra that fall comprised DHF’s first Maker Foundations cohort. There were sixteen youth in the cohort, only three of which were female. “Me, Steph, and Amber [DHF’s Director of Education and Operations Manager, respectively] wanted to try to increase female retention in programs and sat down to brainstorm different ideas,” Sierra said, “I knew that I had stayed as long as I did because I’d formed a bond with Steph and wanted to find opportunities for other girls to collaborate with staff.” These preliminary meetings led to the formation of the Makerettes, a group of female youth and staff at DHF who meet twice monthly to collaborate on a variety of different projects. 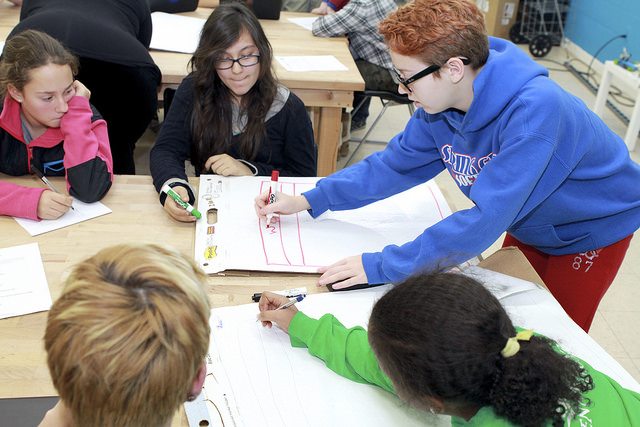 “I fell off one summer because I was going through some transitional changes in my life and it was hard to come in and do something without knowing what to do,” said Sierra. The Makerettes were a support system that guided Sierra and other girls as they explored different projects. Many of the projects Sierra created have become long-term installations at DHF.

“My final project in Maker Foundations was the Jukebox Piano,” said Sierra, “It’s a piano hacked with Raspberry Pi and MaKey MaKeys to play a song from a selection according to what key is pressed.” The Jukebox Piano was selected for the White House Science Fair in 2014. “It was a huge achievement for me,” said Sierra, “because it was the first time I was getting recognized for the work I was doing.” 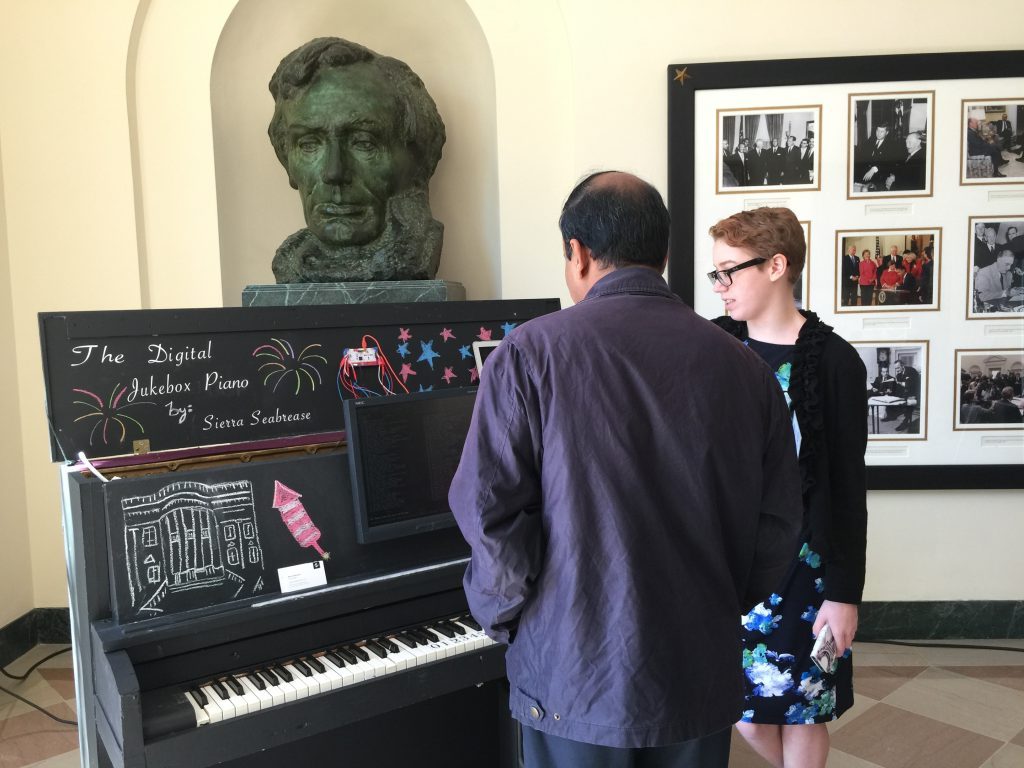 When Sierra became a Member at DHF, she started working on other projects with CNC machine and 3D printing photographs. She also built a photobooth and created an egg bot – a robot that draws on small round objects such as ping pong balls, light bulbs, and eggs. Her jukebox piano, too, went through several different iterations.

“Now, in my internship at Fearless Solutions, I’m doing a lot of software testing and coding,” said Sierra, “We made a map for Hubzones around the world with the small business administration. Hubzones are disaster areas or economic stress areas – if you’re in a hubzone, the government can give you money. I’ve been testing the software with another intern and am learning Ruby to test on my own.” 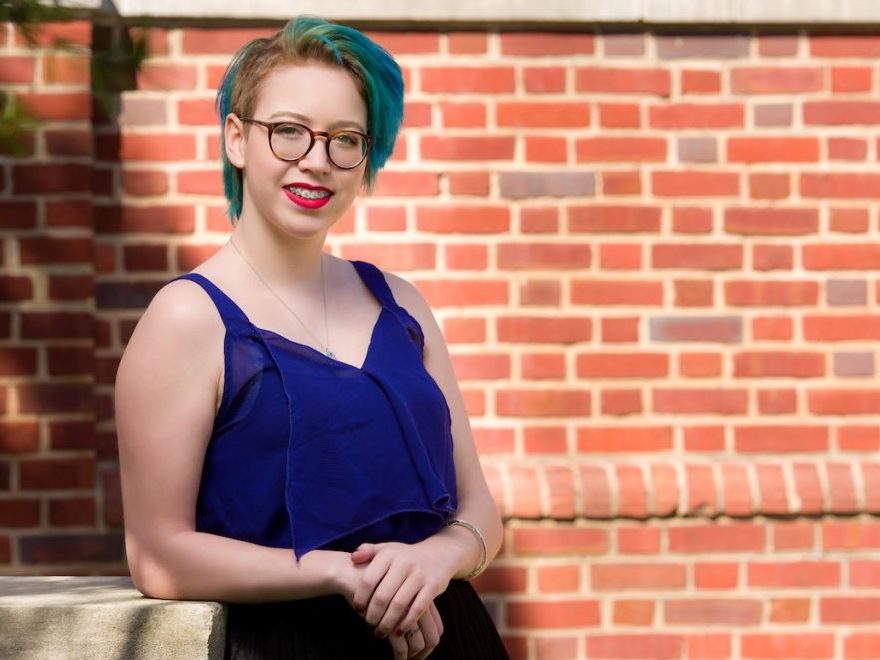 This fall, Sierra has begun her freshman year at the University of Maryland where she plans to study mechanical engineering. “My mom says that when I was younger I used to build stuff out of nothing,” said Sierra, “I would make structures out of cardboard and straws and call them UFOs. Now I can build things as a career and I wouldn’t have known that without the support I had at DHF.”

Read more about Sierra in this feature of her work in POLITICO Magazine: How a Young Woman’s DIY Jukebox Caught the Eye of the White House

Digital Harbor Foundation is very passionate about having females in our space and involved in what we do. One of our main goals is to increase the number of female program participants and increase retention of girls in our programs. The Girls & Making Series is a way for us to share success stories and the important role that females can play in making and technology projects and careers. To read more posts from this series, click here. 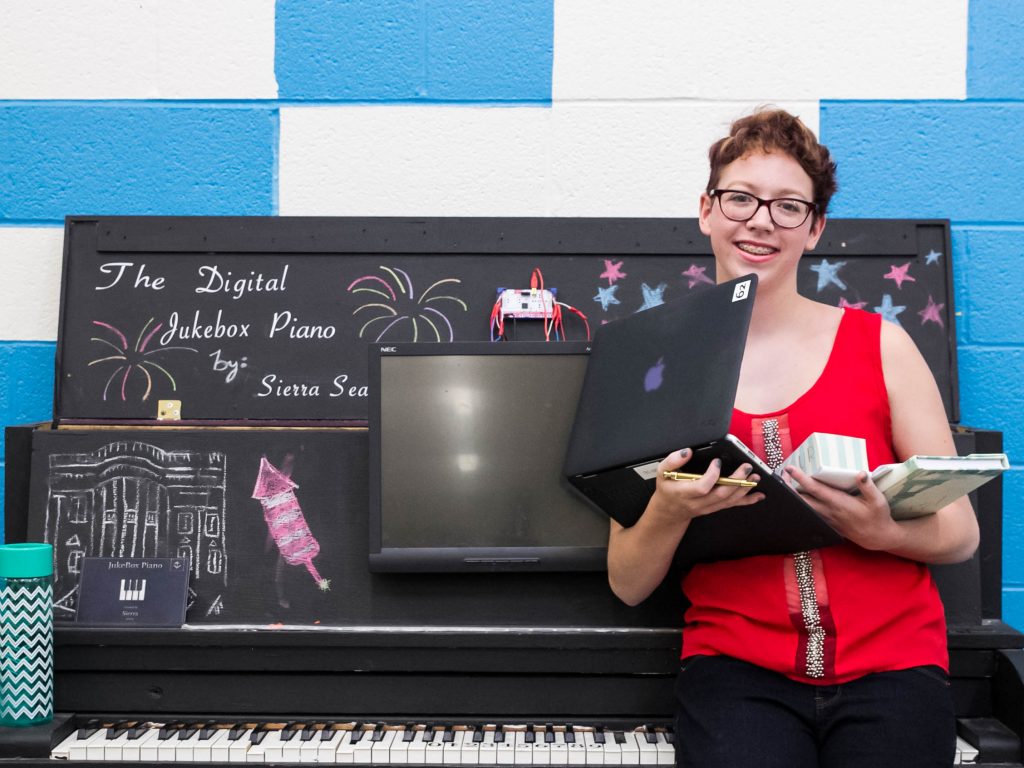 “I consider myself a maker because I use my creativity to make things, whether it’s a jukebox piano or a simple craft,” said Sierra, one of our most active youth here at DHF. She first got involved in our programs in the fall of 2013 and she says that her experience here has been “insane.” “I never in a million years would have thought that I’d present at The White House or be involved in so many different events. All of this was possible because of the opportunities DHF has given me,” she told us.

Throughout her time at DHF, Sierra has grown to become very passionate about making, but even more passionate about girls and making. Early on in her time with us, Sierra noticed the lack of females in our space. “My theory is that the girls who came here didn’t have the opportunity to form a bond with anyone, which lead them to leave because they felt unwelcome,” Sierra shared.

Once Sierra began to notice this ongoing trend, she decided to do something about it. In November of 2014, Sierra formed a group called “The Makerettes.” “I started this group as a way for girls to be more comfortable here, to become more united, and to take action in the STEM industry.” This group consists of female Tech Center Members as well as female DHF staff. The group meets regularly to work on projects, discuss making, and get to know each other better.

Sierra believes that other makerspaces should have all female groups like “The Makerettes” because it helps to teach girls that making and technology is for anyone, not just boys. “More girls should get involved in making,” Sierra said, “I believe that many girls enjoy it, but are pushed away because it isn’t a typical female activity. Society pushes us away from it, whether we like it or not.”

When she first came to DHF, Sierra did not like technology. She joined us because she needed an after-school program and her mom was pushing her towards technology; which she was very hesitant about. However, through her experience with us over the past few years, she has become comfortable enough with technology that she has decided to study Electrical Engineering at either The University of Maryland or Johns Hopkins University when she goes to college in the fall of 2017.

For the past few weeks our Makerettes have been experimenting with screen printing with vinyl.  We had a lot of fun creating images, seeing them cut on the vinyl cutters, and, ultimately, transferring our designs to t-shirts. 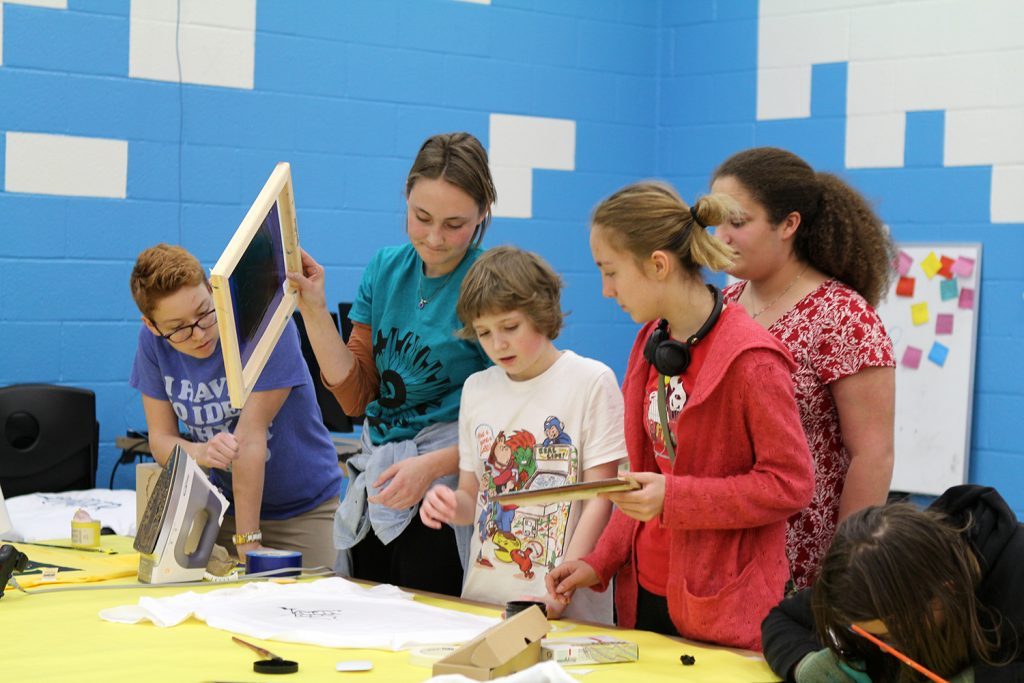 There are several ways to design an image so that it will cut on a vinyl cutter. In essence, you want to create a file that the machine can understand as paths for it to trace with a blade. You can these paths (vectors) directly by using programs like Inkscape (free) or Illustrator (subscription-based). There are also ways to take regular (bitmap) images and convert them into this vector format. For instance, we used an Autodesk app called Vectorize It to convert photos we took of hand-drawn designs. We then converted our vector files to AutoCAD Interchange Format (.DXF) so that Silhouette Studio (free software that controls our vinyl cutter) could translate our paths and turn it into motion.

[box] Note:  Autodesk Vectorize It is no longer available. This product, Vector Magic, will do the same thing. [/box] 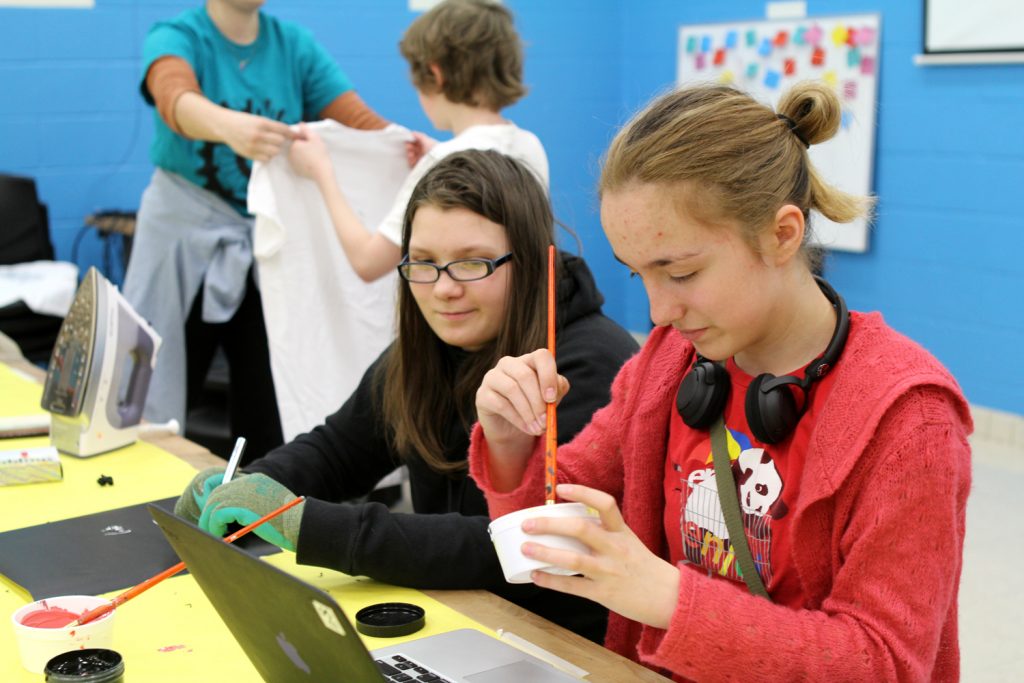 Once we finished designing and generating our cut files, we turned to our vinyl cutter (a Silhouette Cameo). This cutter is essentially a machine with a blade that moves back and forth along an x-axis and rollers that feed material forward and backwards along the y-axis. This range of motion allows us to cut (or plot) anywhere within the range of the material we feed into it. In general, we cut our vinyl in to 12×12 inch squares or smaller because they fit on our cutting mat that way. Once our designs were cut into the vinyl, we removed the pieces that corresponded to areas where we wanted ink to show up. 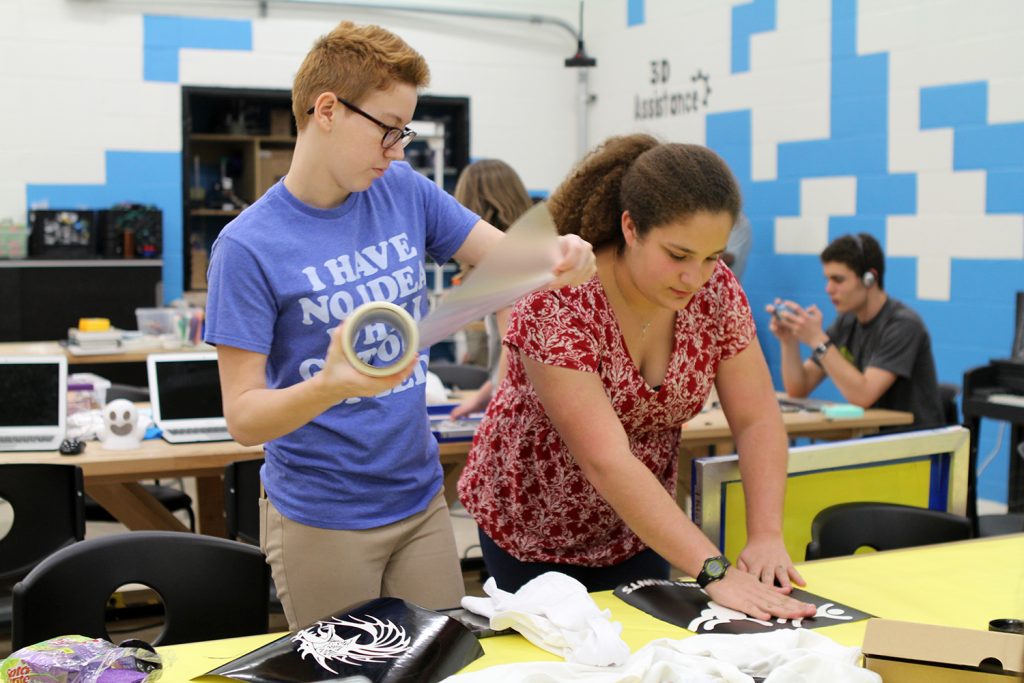 Once our vinyl was prepped (weeded) properly, we applied it to our screens (on the side not in contact with our fabric). Initially when we first started this process, we used embroidery hoops to hold the silkscreen in place. Our friends over in the NanoLab used this method and it worked great for screen printing at a smaller scale. The smallest hoops (5-6 inches) held the fabric in place really well, but the larger ones (10-12 inches) were too loose. When the silk is too loose, it’s harder to keep it in contact with the surface you’re printing on and the the edges of your design tend to bleed. At first we ended up applying the vinyl directly to our t-shirts and using it as a stencil to paint in our designs by hand. It wasn’t what we set out to do, and we couldn’t reuse the vinyl, but we still got some cool looking results. 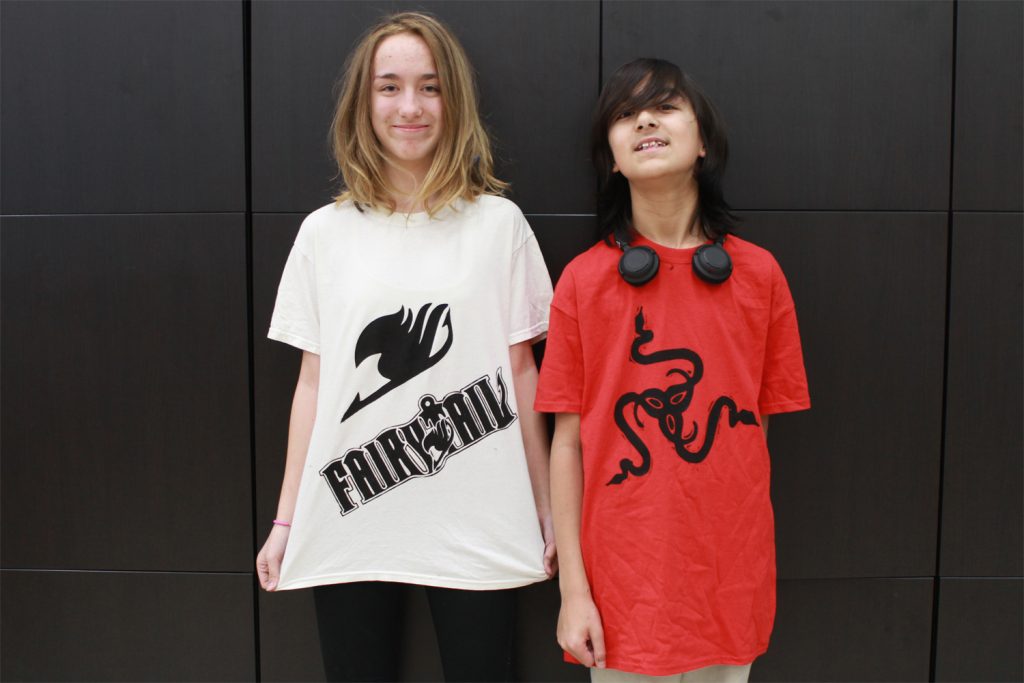 At our next meeting, we used store-bought silkscreens ($15-20), but one could easily stretch the silk over picture frames or canvas stretchers for much cheaper. Having the fabric taught made a huge difference and we were able to get really great results from pulling the ink (Speedball acrylic silkscreen ink) across the screen surface. This also allowed us to get multiple shirts from one piece of cut vinyl. Generally, I’ve found that the vinyl stays stuck on the surface of the screen for somewhere between ten and twenty prints. After that, the vinyl’s adhesive will wear out from the moisture in the ink and you have to reapply it. 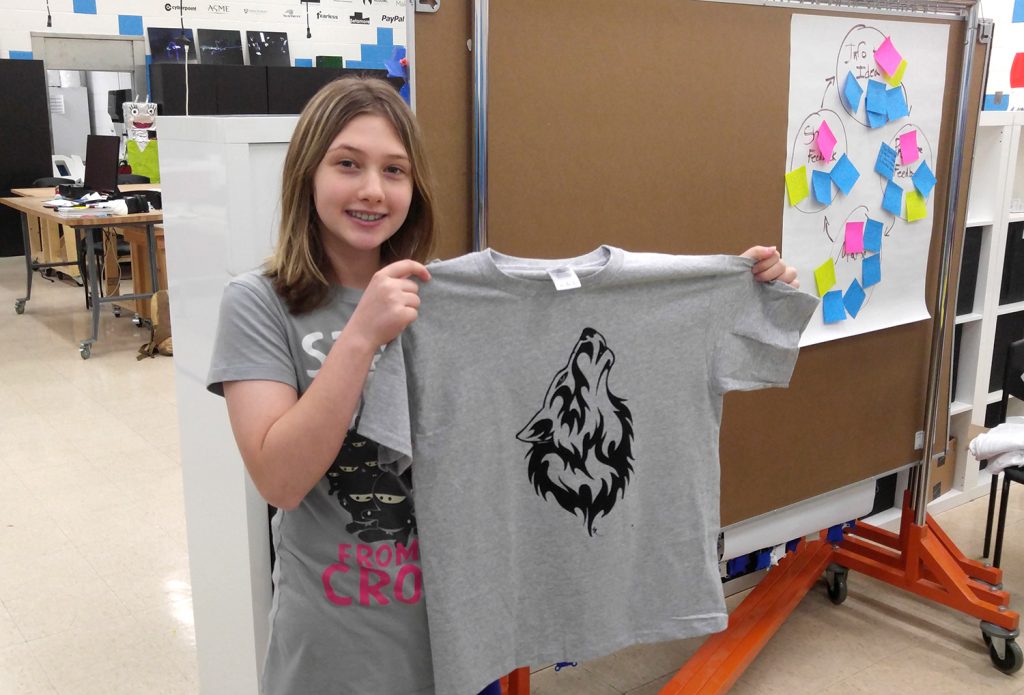 Even though we drastically improved our methods for silkscreening, we still had fun using the vinyl as a stencil directly on the fabric. Some of our youth got really great looking effects from using multiple colors of fabric paint inside the boundaries of this stencil.

I was so excited to experiment with this process and even more thrilled by the enthusiasm our youth showed for it. I can’t wait to see what they keep making with these tools in the future!

We are excited to announce that the White House has invited DHF youth Sierra Seabrease, a 15 year old Baltimore City youth, to present at the 2015 White House Science Fair today! We are so proud of her accomplishment.

At the Science Fair, Sierra is exhibiting a digital piano jukebox that she designed at Digital Harbor Foundation. Sierra turned an abandoned piano that was left over when the South Baltimore Rec Center closed into the  jukebox. It uses electronic components that connect the piano keys to an digital interface that displays a playlist from Spotify. 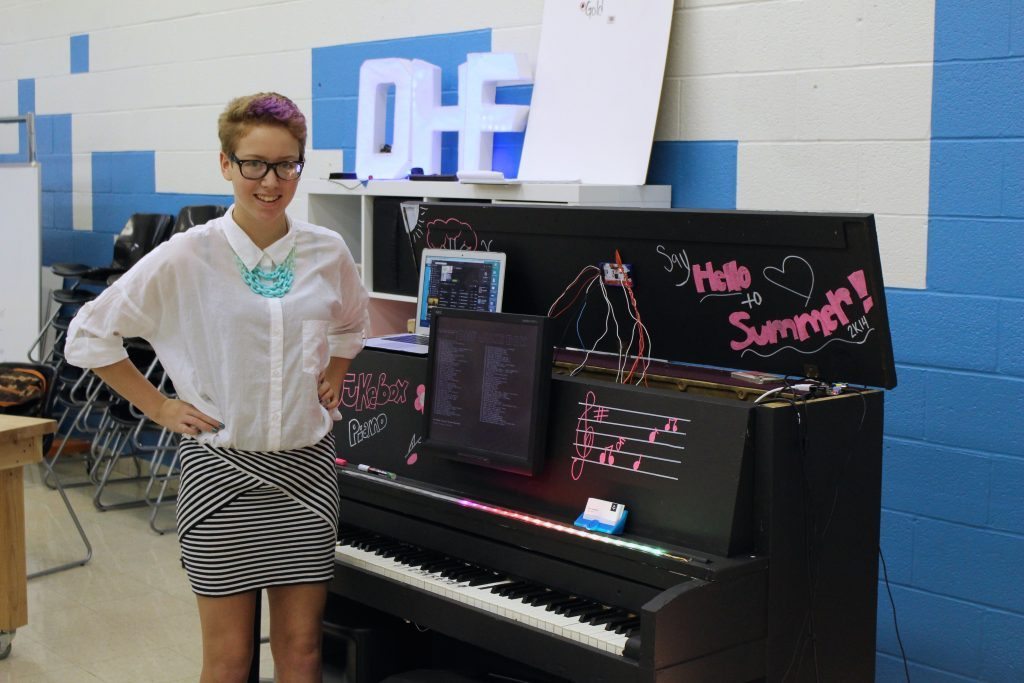 This year’s Science Fair has a specific focus on girls and women who excel in STEM. Sierra could not be a better fit! In addition to working on technology projects at DHF, Sierra is the founder of the Digital Harbor Foundation Makerettes club, a user group for female students at the Tech Center.

This is the second time that a Digital Harbor Foundation youth has been invited to showcase their work at the White House. In June 2014, DHF youth Darius McCoy presented 3D Printers he built at the White House Maker Faire.